Photographer Clive Brown visited the Island for a short break during May 1982, when he was able to capture some of the many facets of Manx transport during that period. It was an interesting toime especially on the bus scene, with many of the 'traditional' buses entering their twylight days in service being replaced with more modern types, albeit second-hand. Clive has a many thousands of transport and scenic photographs from all over the UK on his website at http://www.flickr.com/photos/cliveabrown/ with the Manx page at http://www.flickr.com/photos/cliveabrown/sets/72157605943072350/ and has very kindly allowed the inclusion of some on the Manx Electric Railway Society website. To see these images in full-size or the other good quality photographs from his collection please take a look at the above links.

This page continues to look at some of Isle of Man National Transport's double-deckers found in the fleet during May 1982. The MERS is very grateful for the use of these photographs, which make a welcome addition to the website. Copyright for each view remains with Clive Brown. 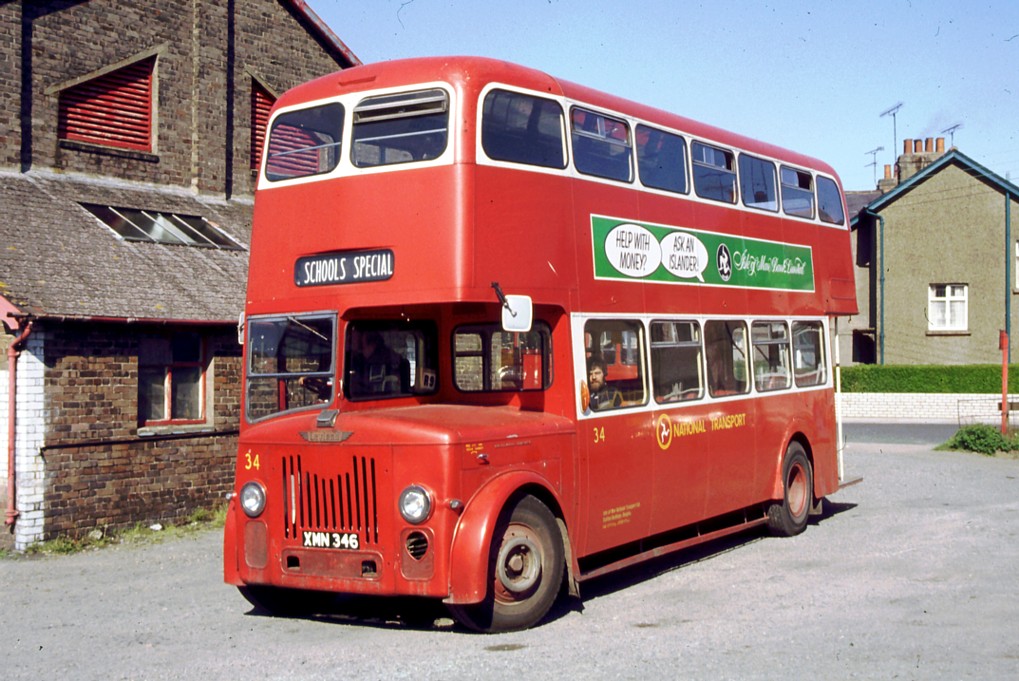 Wearing the original Isle of Man National Transport livery well, Metro-Cammell Orion bodied Leyland Titan PD3 34 (XMN 346) could still be found on schools and service work in 1982 despite being 24 years old.. It is seen at the rear of Ramsey bus garage working duty R9, which at that time of day saw it on a schools run. 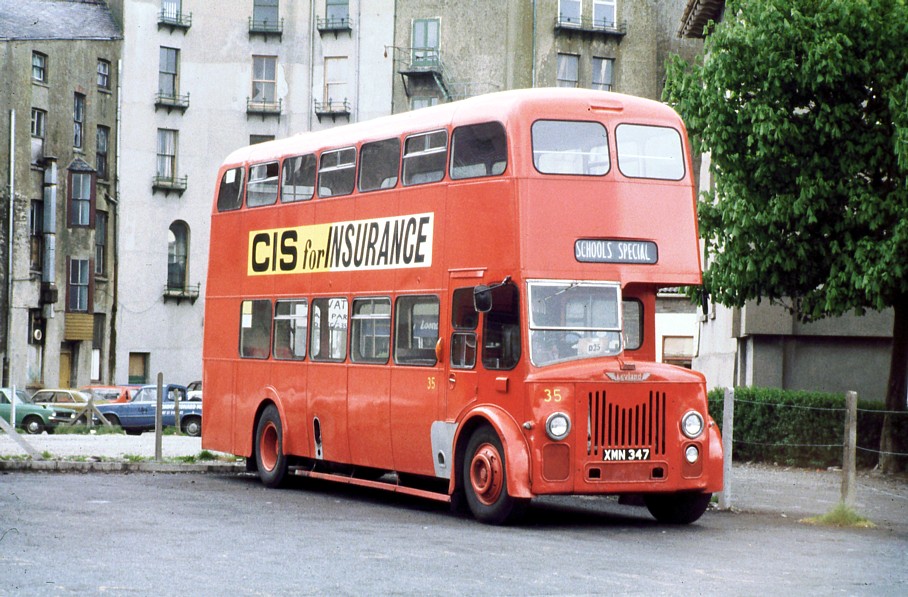 Few of the half-cab buses gained the short lived, drab and uninspired all-over red livery, but two that did were 35/36 (XMN 347/345) from the 1958 batch of Leyland Titans. The former is parked on the area of land in front of Cambrian Place, commonly called the 'Patch', opposite Douglas bus station, and carries side advert for CIS Insurance, a regular advertiser on Manx buses. 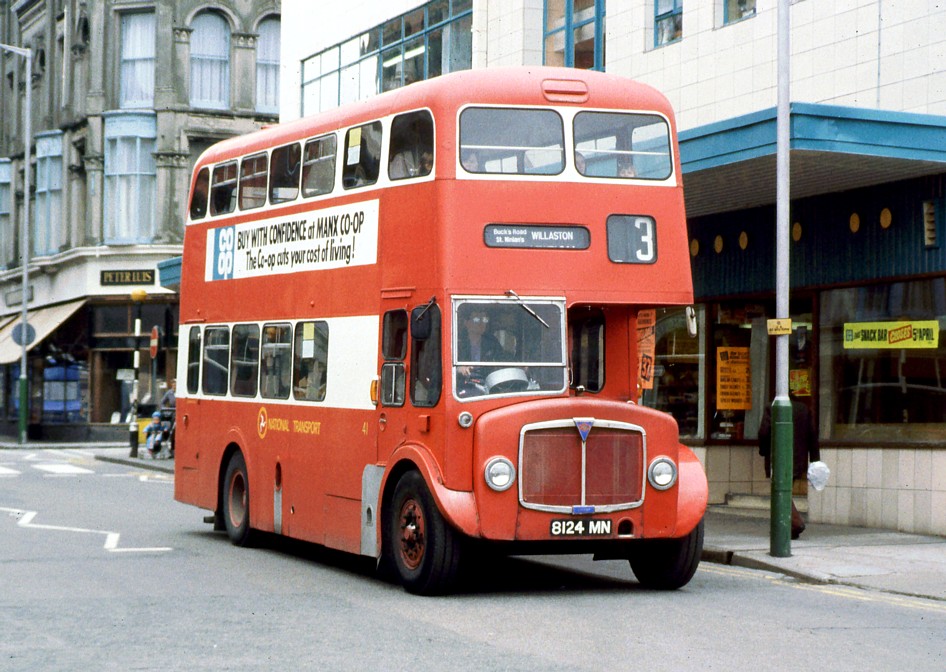 Another frequent advertiser was the Manx Co-op, as seen on the side of AEC RegentV 41 (8124 MN) which by chance is passing one of the six remaining Co-op shops in Douglas. During this period two of the town services were 'linked' operationally, the 3 service to AnaghCoar and the 22 to Willaston. Consequently when a vehicle departed the outer end of each service it was the practice to show the correct route number for the service but with the ultimate destination for the other service, with the route number only being changed at Douglas bus station. Upon setting down in the bus station a few moments later, driver Les Cannan would change the screen to show '22 - Bucks Road, St. Ninian's WILLASTON' 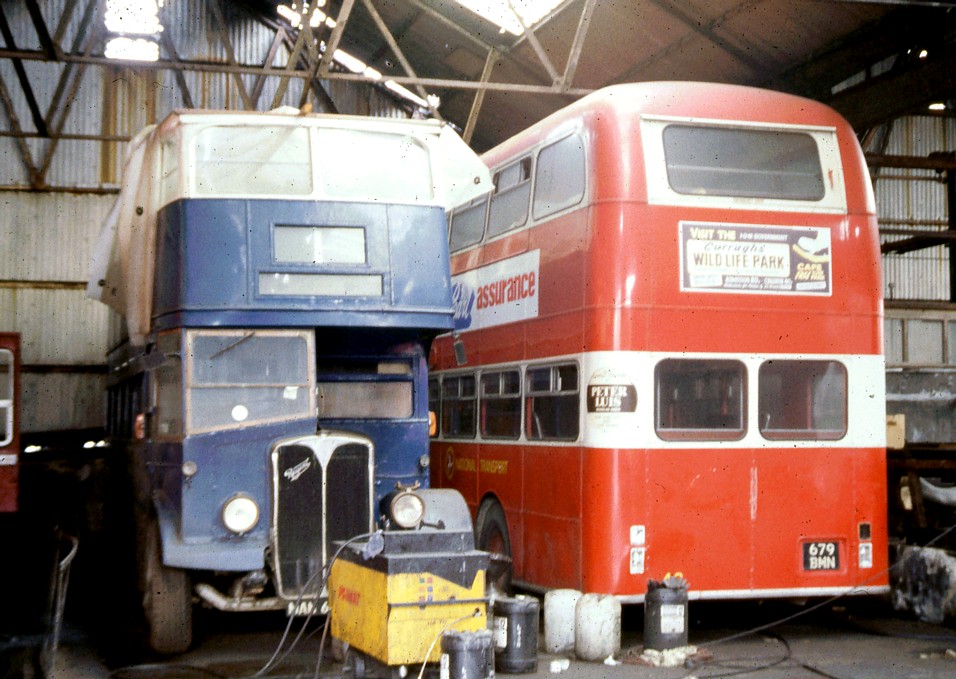 Caught at the rear of the former Douglas Corporation depot in York Road, Douglas are two differing AEC Regents - withdrawn mark V 43 (679 BMN) and mark III MAN 643J. The Northern Counties bodied mark III had once been 56 (HMN 687) in the Douglas fleet but had been sold prior to the merger of the DCT & IoMRS operations in 1976, passing for non-psv use and when it was reregistered. After disposal by its new owners it was stored for a while back at its former depot, but would soon leave the Island for scrap. The Regent V was unique in the fleet, being the first ex-DCT bus to receive IoMNT livery it gained white upper deck emergeny exit surround, the application of which was dropped on all subsequent applications. 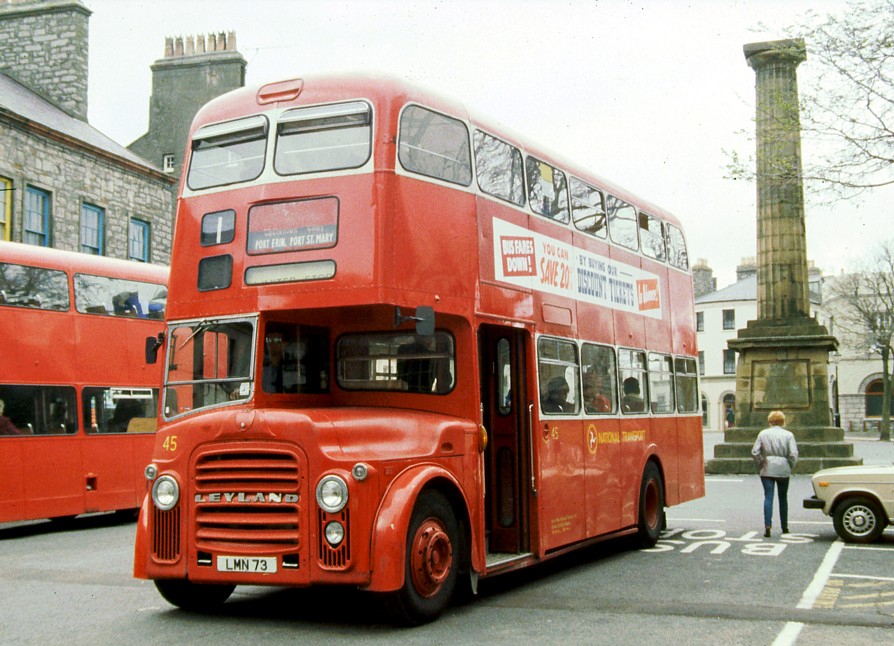 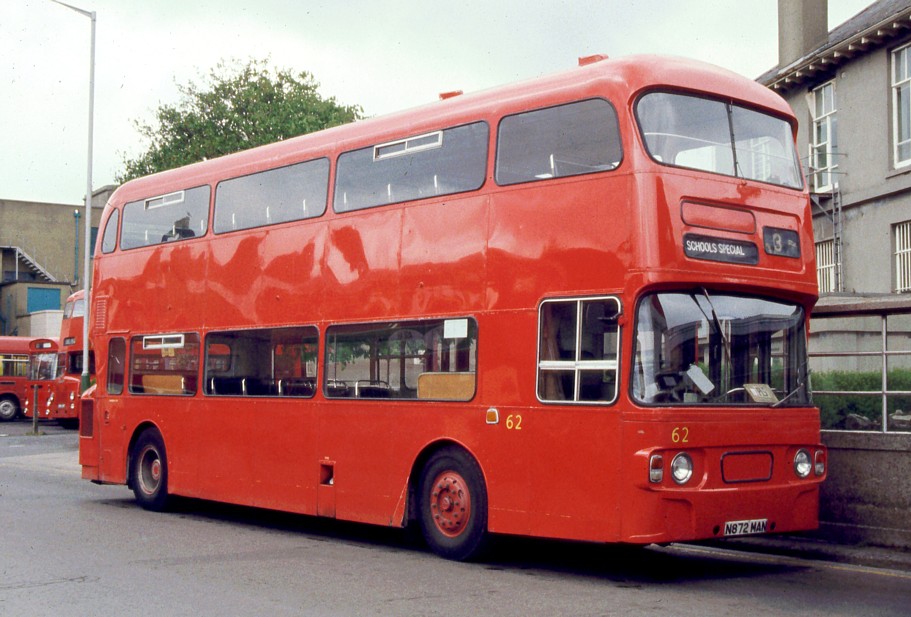 Gradually entering service during 1982 were further Alexander panoramic bodied Leyland Atlanteans acuquired from Tyne & Wear PTE the previous year. Despite the majority being delivered in the drab all-red livery, only the first two to enter service sported this garb, the scheme being abandoned before the others could be prepared for service. 62 (N872 MAN), parked on Lord Street, Douglas, would soon be repainted into an all-over advert - which were becoming increasingly popular for a number of years from 1981, but markedly so during the mid years of the decade. 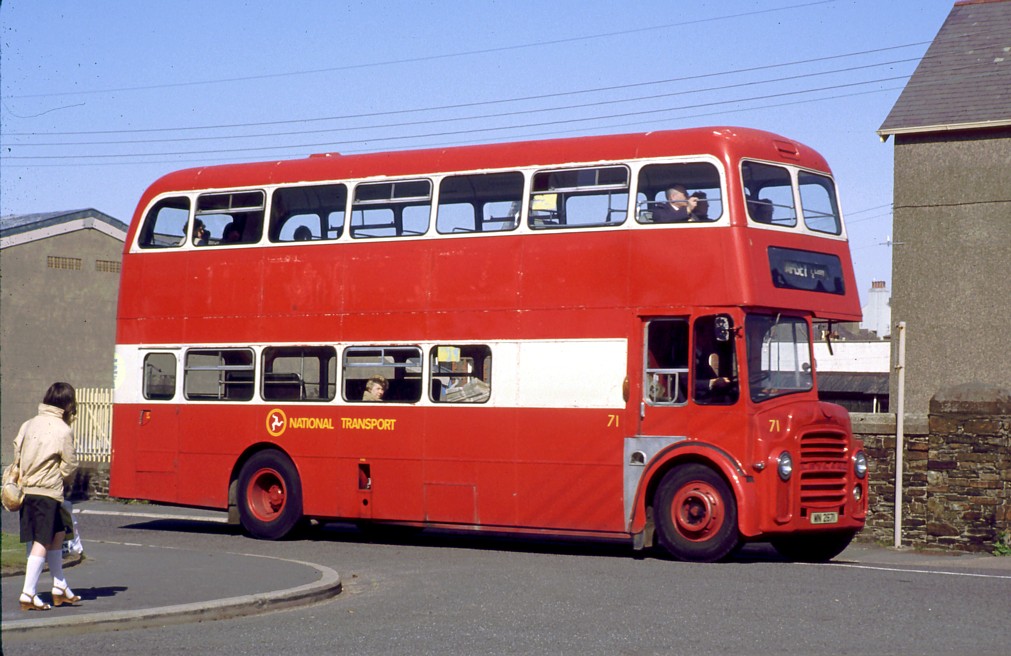 Arriving at Ramsey on the trunk service from Douglas is Willwobrook bodied Leyland Titan PD3 71 (MN 2671), which had been new to Stratford Blue 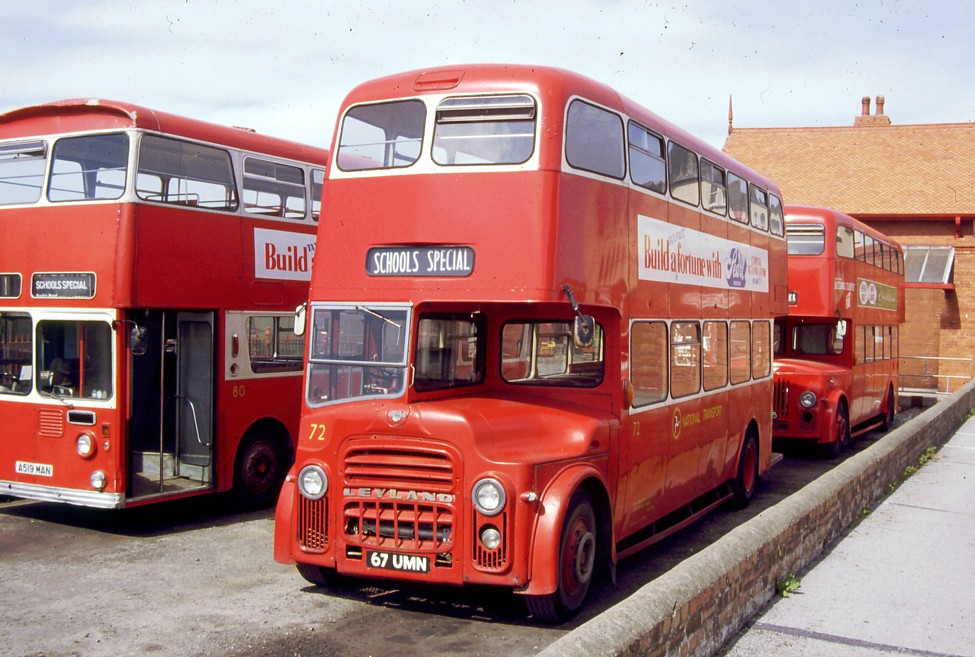 In 1982 all six former Isle of Man Road Services rear-entracnce Leyland Titan PD3's were still in use both on schools and service work, including 72 (67 UMN) dating from 1964, seen at Port Erin depot 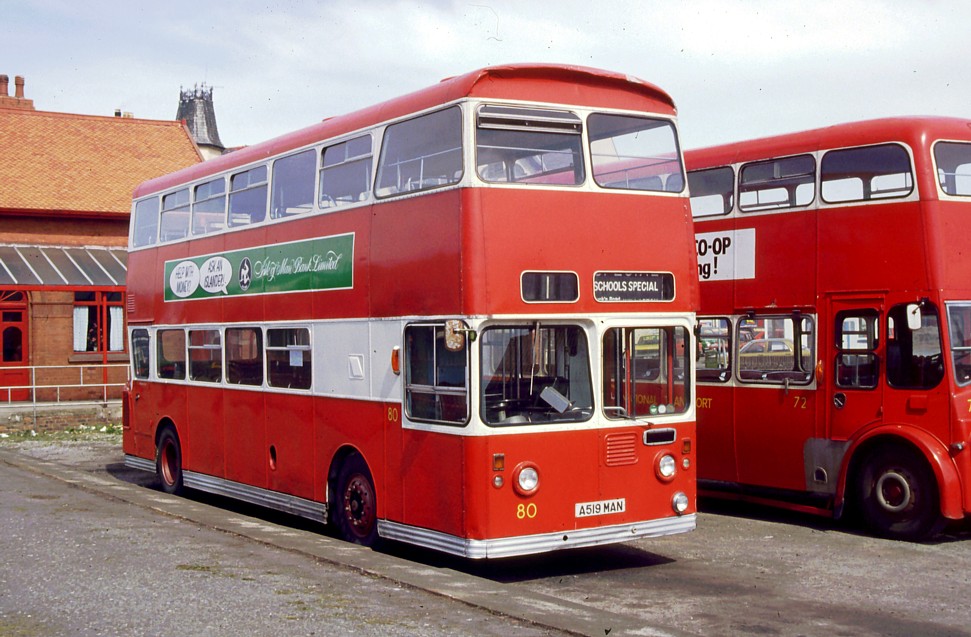 Also at Port Erin is former Liverpool/Merseyside PTE Metro-Cammell bodied Leyland Atlantean 80 (A519 MAN). Following a spell out of use, the bus returned to service less it's offside fleetname 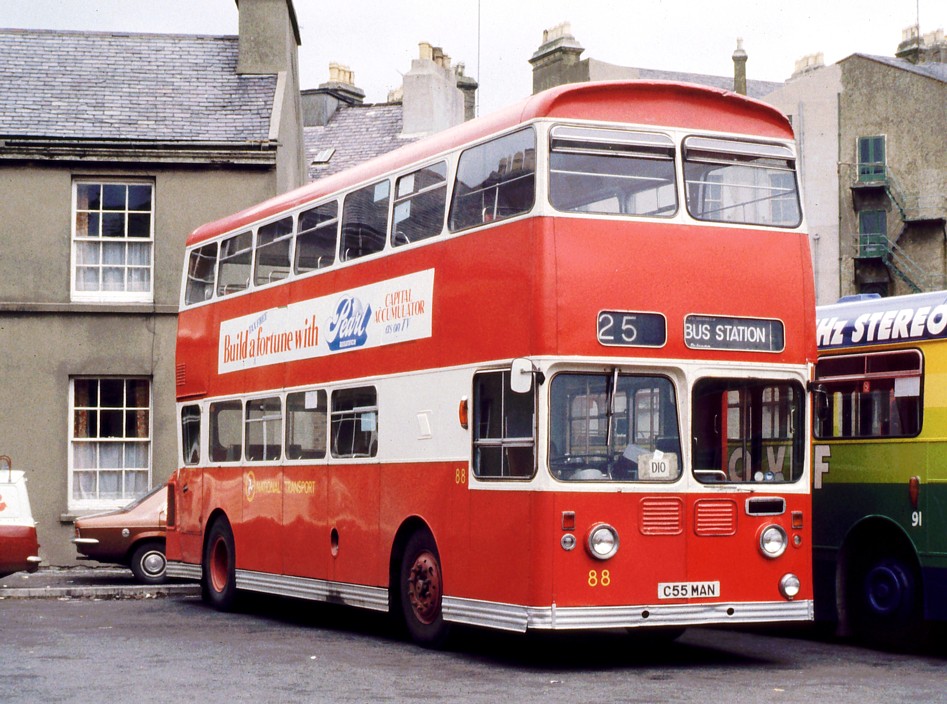 Numerically the last of the ex-Liverpool Atlanteans, 88 (C55 MAN) is seen on the 'Patch' at Douglas. Alongside is former Preston Corporation Marshall bodied Leyland Panther 91, which upon arrival on the Island had been re-registered with the mark C58 MAN formely carried by Atlantean 87, by then withdrawn